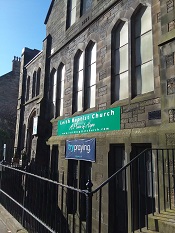 Sometimes we need reminder God still works the miraculous.  I’m not referring to the traditional prayers offered for our friends and families members who are facing some illness and on the way to the hospital where they are receiving treatment by a team of competent physicians.  Its fine to pray in such circumstances, but Christians serve a God that is above the natural; supernatural in fact and I’m afraid in modern day evangelicalism we often forget that…or take it for granted.

Recently SFC had the opportunity to participate in an international mission to Edinburgh Scotland which involved combining the resources of eight different churches involving pastors and missionaries from Mexico, South Korea, Austria, Wyoming, Boulder and New York and the believers of at Leith Baptist Church and evangelist David Hogan, to impact the area of Edinburgh for Christ.  Of the many ways God showed up supernaturally, I’ve decided to share this one particular miracle as I know many of you need to hear it. Frankly, your faith has come to the point where you don’t believe in the God of the supernatural.  God has become the God of the practical.  When God becomes practical in our lives there seems to be the inevitable shift in our faith to becoming ordinary.  I never read in the pages of the New Testament that the life of the believer is supposed to be ordinary.

On a Thursday almost two weeks ago the day of the first night of our event featured our evangelistic speaker, our mission team was ministering in the City of Edinburgh finding folks to pray for and to invite to the church for the Thursday and Friday night event.  John Drummond, one of our host churches elders and a wonderful man in Christ shared the following extraordinary chain of events.  I’ll let John tell it in his own words as I asked John to share it for us:

“So we were invited to join you guys on the outreach.  I chose to join the treasure hunting group (treasure hunting is where a group of believers pray for Gods insight to talk to specific people before attempting outreach).  Many different connections were happening and God was talking to me telling me He was already speaking to the hearts of people who we were as part of our outreach, to confirm God was talking to them.  As people who we talked to where responding positively, confirming exactly what we were expecting, my faith was built even more.  With this “burst” in my faith I began to speak to people who were not on our “treasure hunt spiritual radar” just whoever God brought in front of me.  I was with my son Jude and we went into an area where we saw two ladies and one of them smiled at us. So, I began talking to her about our “treasure hunt” explaining God was talking to people and I asked if she needed prayer for anything. She told us about her diseased eye.  (her eye was obviously severely damaged, the eye was a different shape than her good eye, it had a film over it and was actually a different color) She told us it was inoperable and because of it she could not fly to visit her son in America. I asked if I could pray for her and she agreed.  I prayed for her right in the store.  After not having anything change, I gave her a flyer for the healing meeting we were outreaching for and shared some of the testimonies of what God was doing in the life of our featured speaker David Hogan. Then we were asked to not pass out leaflets by the shop manager. So we left but still continued to have other amazing links with people on the street.

That night at our event the lady I prayed for in the store came. After David’s message from the Gospels, David appealed to the people to come forward and my friend stood up all ready to go forward.  As David’s initial appeal was for salvation though, she wasn’t requesting that so I suggested we just pray while we she waited for someone to pray for healing for her. Then there was the call for healing and the Holy Spirit directed me to tell her to keep standing and press forward so she could receive prayer from the primary prayer team up front.  I went and prayed for others having a great time but I kept relatively close to her.  I prayed for her again and moved her closer to the stage.  I then was asked to come on to the stage to pray for people which put her in position for me to pray with her again.  My wife (Suzy) was busy praying for others so I prayed again for this woman, following guidance from the Holy Spirit and then asked her if her eye was any better.  When she looked at me she now had two beautiful blue eyes that were matching and healthy!  All she said was “Ya it seems fine, now I can visit my son now, God is Good!”

Now as the representative from SFC being personally present I can attest to this event and it was only one of many remarkable instances where God chose to show up and act supernaturally amongst His people and for those who were seeking Him. God used me personally in multiple instances of deliverance where folks were relieved from tremendous spiritual oppression.  By doing so He demonstrated His love and more remarkably His power. In 2015 God took me to the woodshed and showed me my intellectual faith had no power.  Jesus didn’t leave us simply with the knowledge of how to get to heaven and a reminder that God loves us!  He also told us He would give us the power to live and impact the world to be His witness!  I had a lot of knowledge mind you I could tell people the way of salvation but I couldn’t complete the message by reassuring them He also gave them power to live a transformed life.  Christians these days don’t reflect much of the power of God.  That have fine tuned their “doctrine” and what they believe and are quite expert at it.  Because we personally don’t believe in a God who does the miraculous we rely on bringing people to church hoping God will do something amazing for them when He wants to do something amazing through us!   But the world isn’t looking for another great explanation of what we believe.  It is looking for a God of the impossible to reach down into what feels like the impossible of their lives to lift them out of hopelessness and give them power, purpose and hope.  We don’t contain God in a box.  He isn’t limited by one bit by our fancy churches and modern way of appealing to the masses.  In fact, and thankfully, He acts in spite of our antics and lack of faith!  I had the opportunity to work with John Drummond over the course of the weekend and the pastors and missionaries of our multiple national mission’s team and see God work creatively, uniquely and with power on multiple occasions.  If He does that in Scotland, He’s wanting to do it in your own neighborhood as well.

I’m sure as this is being read many of you are reminded that “Yes I do believe this is type of God I serve!” Don’t let the Christian intellectualism convince you God isn’t at work doing the miraculous.  He’s not looking for intellectuals, He’s looking for obedience and faith, which remarkably equals trust!

If you would like to know more about how you can have a personal relationship with God through his Son Jesus Christ, contact Leith Baptist Church at:

JP Grier is the founder and writer at SentinelforChrist.com – A network of Christians helping each other to press deeper in Christ.