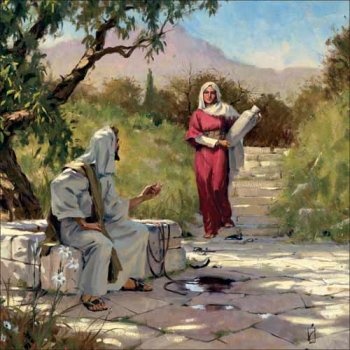 PLEDGE PRINCIPLE VII:  “I believe every man woman and child has intrinsic value because they are made in the image of God and that image remains despite circumstances failure and appearance.”

This is one of these Christian principles that’s easier said than lived.  But the Bible is clear from the beginning man and woman are created in His image giving them surpassing value and worth.  We are in essence “a part of God” all of us not just those who profess Christ but from the Kansas mother who raising her kids on the farm to the youngest soldier in a hole serving the Islamic State.

By the time Jesus came on the scene and returned to the Father, it was fitting for John one of His disciples to write the words of John 3:16, there was already rivalry taking place between Jewish Christians and Gentile Christians after the church began to spread and John wanted to make sure we understood the Love of God made possible in His Son covered “the whole world.”  Gods love and forgiveness is for everyone who would reach out to God in the belief God had remedied Sin by HIs Son on the cross.

“For God so loved the World……”

I don’t know about you but I find it difficult at times to demonstrate patience with others Christian or not simply because extending respectful consideration of them, their opinions, their habits, takes time and frankly is an inconvenience to me. No matter how long I’ve been a Christian this seems to plague my attitude towards others.  I think its central to being human. We are independent and in that respect selfish by nature.  What an opposite attitude as compared to the writings of Paul who reminded us in the second chapter of Philippians:

“Do nothing from selfishness or empty conceit, but with humility of mind regard one another as more important than yourselves; do not merely look out for your own personal interests, but also the interest of others”

Continue the section.  Its worth committing to memory!

Selfishness and focusing on our own destiny is nothing new to human beings. Its was the argument used in the garden to break the first couples fellowship with God… and with each other.

Pledge Principle VII is a litmus test for faith.  its possible to spend years in church and still be focused on our own self interests.  Now there’s an argument for taking care of your family and making sure bread is on the table for sure.  It is only when a Christian truly understands the value God has placed in every human being that they understand the responsibility and the call to be “light”  Are you truly light in your circle of friends?  Are you truly light at work?  Are we truly light in our own family while managing our kids? This can only be answered by the individual human being asking it.  You see its easy to appear benevolent.  That’s no different than donning a mask!

We also have a tendency to fall back into our old ways of thinking and conducting our self.  This spiritual principle doesn’t get remedied by “taking an oath” and then shelved for later use.  Its one of those personal spiritual conditions we should check in from time to time.  It’s no mans land, it will stretch us for sure and possibly put us in unfamiliar territory (Pledge Principle VI) but well worth the effort as our efforts help transform the current kingdom closer to what it will eventually be when our Lord returns.  Wont that be something!