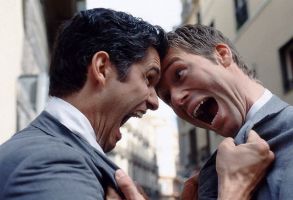 Pledge Principle IX  “ I will make the most of every opportunity to share Gods love demonstrated by His Son Jesus on the cross gently, respectfully and soberly without compromising truth.

1 Peter 3:15 “But sanctify Christ as Lord in your hearts  Always be prepared to give an explanation to everyone who asks you to give the reason for the hope that you have, yet  with gentleness and reverence.

It’s one thing to know the right thing to do and another to convey it in a way that promotes camaraderie between two people.  You can’t make yourself likable or appealable if you’re not!  While this should be painfully obvious I’m afraid we Christians have a tendency to fall into the trap of sharing God’s love in a way that makes the world choke on it!

Years ago I had a Christian friend who was very dogmatic, (fancy word for really really personally convicted about his beliefs) everything he thought about was right.  In his mind there were no shades of gray when it came to faith or disagreeing with him.  As a result he would regularly tell share with others how they should change their lives.  He was completely oblivious to the fact he was being perceived as extremely intrusive.  He was also so powerful in his presentation he could get people to concede to his views and apparently, abandon their own.

Now I’m not making a value judgment on his behavior but I will make an observation.  Brow beating someone to believe anything is a fruitless endeavor, (of course if you’re a tyrant and you’re trying to avoid a revolution it makes perfect sense!) When we try to force others into our belief system as Christians we are not emulating Christ.  There’s a reason why the passage from Peter is used for Pledge Principle IX.

“yet with gentleness and reverence…”

There are many reasons that motivate our behaviors in life.  But when sharing our faith its crucial our motivation stems from a desire to be used by God in the way He sees fit, not from fear where we “feel” compelled to share “or else” or from a position of authority that diminishes our fellow man from an attitude of self righteousness.  These motivations are a covert form of legalism. We are “earning our keep” before God to avoid something or attempting to add to our account.  Unless the desire to share Christ comes from an intimate response to share the work God has done in our own lives, its runs the risk of being non-authentic, and useless.  It may look good, it may even feel good and still be far from an experience of value.

One day after yet another confrontation with the “church people” of his time Jesus disciples were shocked the by an interchange between Him and the folks which took an ugly turn.  (Read the confrontation in Matthew 15) The disciples thought the opponents of Jesus had some credibility that Jesus was too easily dismissing. The disciples say to Him, Don’t you know the Pharisees were insulted by your comments? (Ppraphrase) Jesus responds “Leave them alone let the blind lead the blind.”  Jesus able to read men’s hearts as “He knew what was in man,” (John 2:25) understood if what you share isn’t parallel to a heart in communion with God, its useless.  Probably one of the most sobering aspects of the account is how utterly convinced the opponents of Jesus were of their own wisdom.  A painful reality check for sure.

Pledge Principle IX is a mirror for our hearts, if our desire to reach others isn’t bathed in a gentleness that comes from a reverence of who God is, we may be saying the right thing, but in a way that’s received in the wrong way.  I rather spend time with someone sharing their journey with all the messiness of life (than I can feel free to share mine too!) than an empty faith disguised as truth.

If the desire and the heart are right with God, we won’t even have to worry about compromising the truth.  It wouldn’t even come to our mind.