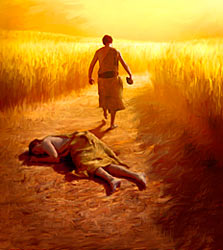 Pledge Principle I My Brothers Keeper

I am a Sentinel.  Contrary to the prevalent belief of the world, “I am my brother’s keeper”  I will bear their burdens honoring them more than myself as a servant…

Where does Pledge Principle I come from?  Well aside from scriptures cited above it came from personal experience.  In 2006 I was in the process of getting divorced for the second time having married a on the rebound.  I was completely out of touch with who I was and more so how deep the layers of poor perceptions, behaviors, and a victim mindset had built up over the years.  To make matters more complicated, I was fairly well known in a large Bay Area church as one of the mission guys, the guy who played Jesus in the Easter play, (yes I’m pained even to admit that) and involved in the lay counseling ministry, worship etc.  As the word got out there was a jumble of commotion, awkward to say the least with me in the middle.  It would transpire in a multi-year journey of pain and cleansing that became the birthplace of the grace that inspired Sentinel For Christ.  So, without any excuses there’s no pretense in the messages of SFC’s ministries as unfortunately I can attest to being part of the exclusive club of “chief of sinners,” or to use a contemporary term “deeply broken.”  During this time and scramble for clarity I was without direction, and save for my faith which was severely infantile…

One Christian reached out…….

I remember well the loneliness, the shame, and the nights so dark they were over whelming.  I would have given almost anything for someone to reach out just to say “How are you doing?”  It didn’t happen. There is a great spiritual apathy that infects the modern church, yes is has been deeply penetrated and is unaware of how great the affliction goes.  It has to do with how well ultimately, we know Christ and has he changed our priorities at the core of who we are to serve and respond to him?  For most of my Christian faith I was the guy who preferred to have the answers but wouldn’t let a risen Jesus to infringe on my personal time.  I could do the exciting short term missions trips or the things which put me in the spotlight, but really I was unwilling to get down in the mire with someone who was broken.  It was much easier to let them come to the door of my counseling office and “treat them” per say from my comfort chair.  Eventually, the divorce and subsequent litigation ended up overwhelming me for years as I fought against God’s repeated attempts to handle the situation his way as opposed to mine.  How I would have benefitted from a mentor or spiritual veteran at that time!  Unfortunately, the ones I had proximity to were either overwhelmed because there is so few of them in the church to begin with, or non-existent.  God is a lot more interested by the way in people who will get involved in the lives of people over our emphasis on projects and programs which keep us distracted from what’s really transpiring in the lives of men and women on planet earth.

This begs the question “Am I my brother’s keeper?”  How far am I supposed to go for someone?

Perhaps the following occasion from the Bible will help us with our answer. Let’s compare a couple individuals for a minute.  Their actually brothers from the same family Take a trip back to Genesis Four, where Cain has just killed his brother and God asks him “Where’s Able?”  Of course, God knows what’s happened. God ask these questions for our benefit not his.  It’s a chance for Cain to repent and come to terms with his heinous behavior.  Even in the aftermath of murdering Cain, God’s right there ready to forgive, offering Cain the chance like us today, to “come clean.”

But Cain unfortunately misses the opportunity.  His response to God is “I don’t know, “Am I my brother’s keeper?”  Well we can infer from God’s inquiry in fact Cain is his brother’s keeper or else God wouldn’t have asked the question that promoted responsibility for the actions of one human upon another.  Notice how the issue of Cain’s responsibility towards others is also confused and complicated by lies. He tells God “I don’t know,” when in fact he did. Cain could have taken God right to the spot where his brother lie in the field.  Hardness of heart and a lack of mercy are nearly always complicated by some type of lie told to ourselves which we invent to alleviate us from the responsibility of helping others. The issue really isn’t that we reject the notion of helping others as much as it represents a problem with love for other men and women who God has made in His image.  You see each and every one of us is valued and precious in the eyes of God as each one of us carries the image of the Creator which gives human beings intrinsic value.  We don’t take for granted the things that are precious to us, we take care of them and nurture them.  If people whom God created in his image are important to you, you’ll find a way to take care of what God values.  Consider for a moment when we see one of our friends or someone taking for granted something of value.  What type of response does it evoke?  Admiration?  Hardly.  If we’re honest maybe disgust, even shock at the lack of appreciation.  When human beings take anything of value for granted it’s not considered noble, its dysfunctional, and viewed as inhumane… even evil.  It doesn’t take a lot of digging to quickly start revealing the heart of men and women…what really lies beneath and motivates them.

One-day Jesus was in a synagogue teaching the people and there was a man present who had a withered hand.  The religious folks in charge of the building and the community were watching him to see if he would heal the man and perform and act of “work” that broke the religious laws of the Jewish sabbath.  Now approaches a significant lesson in value.  Jesus compared the man with the disabled hand to a sheep who had been lost in a pit and exclaimed to the religious rulers, “Even you, every one of you would save your sheep from a pit they had fallen into it!”  How much more valuable is a man than a sheep!” And Jesus subsequently healed the man in the middle of the service to prove the point.  I’m so glad Jesus does these things, he continuously confronts the hardness of my own heart!

I would argue Jesus actions and his Father’s question to Cain clarify we are the keeper of our fellow men women.  And, if there is not a desire within us to make a difference in a world that is so broken and full of misery, there something drastically wrong with our faith.  I’m afraid it is so easy to “know” the things of religion, (including Christianity) but practicing them for many of us is a complete novelty.  This explains why so many people have had an experience with the church or Christians that left a bitter taste in their mouths.  Think for a moment. If we were the type of person that gave someone a bad taste of Jesus can we honestly say we approached the person in an atmosphere of considering ourselves their keeper, or tender guardian, like Jesus, or is our attitude more like Cain’s, resisting God’s call to be responsible and then covering it up with self-deceit.

How far we need to go at resolving this issue of caring for others is between you and God.  But if we’re going to represent ourselves as followers of Christ, then we best get to the type of work Jesus did.

When Sentinel For Christ was formed I had already learned from God, whatever else we did as a ministry, we did not want to be those who stuck their heads in the soil when the situation called for investment.  I suppose things might have turned out significantly different for myself if someone might have partnered with me all those years ago and stepped up to the challenge and reaching out to a very broken man.  Despite human failings, God still turned something bad in to something pretty amazing.  Ten years have passed and the ministry of Sentinel-For-Christ specializes in slowing down, rising to the occasion as best as possible and walking with others the way Jesus walks with us. I suppose there might be those still unconvinced and unwilling to slow down and take the time to step into the lives of others that pushes the comfort zone.  I spent a lot of time believing that myself.  But I’ll share this: we won’t be conformed to the image of Christ unless we actually start behaving like Him!  Take a moment this week to ask God is there someone in your circle of impact you’ve been overlooking that He might want you to slow down for?  I can readily assure you it won’t be long before you see the need the way Jesus did!

“Behold, I say to you, lift up your eyes and look at the fields, for they are already white for harvest.” (John 4:35)

JP Grier is the founder and writer and Sentinel For Christ – network of Christians helping each other to press deeper in Christ.