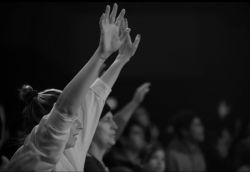 The past couple of months, my prayer has been that the Lord would break my heart for what breaks His. That my heart would be broken for the people that break His heart. That I would be moved with compassion the way Jesus was moved with compassion for people. That He would trust me to share in the fellowship of His sufferings (Phil 3:10). Over the past month I believe He has begun to answer that prayer, surrounding me with broken, sick, hurting people in such heavy situations that make you want to cower into a ball and accept defeat. I asked Him to share His suffering with me and once He did it made me second guess my prayer because standing in these situations with these people was so excruciating. Enough to make my stomach hurt. Every time I closed my eyes, I would see them in their pain. I couldn’t even sleep some nights. There are at least four people He has connected me with within the past two months who are in what look like absolutely hopeless situations. But, I know that He brought them and their hopeless situations to me so that I could introduce them to Him, the Hope of glory.

Last week, I was sitting in my friend’s car and I just began weeping because it was just one of those days when it felt like everyone, I’d been contending for was just being wiped out by the enemy and I just sat there and allowed the devil to sing his song of defeat in my ear. In that moment, the Lord spoke to me through my friend and said to me, “Whatever I put in your lap is not meant to stay there. Whatever I put there you are to hand over to me. You alone can do nothing. Your lap is a place where people’s burdens pass through. Raise them onto me. Don’t ever make your lap a home. Your only job is to point their chins up to the One whose name is greater. I do the heavy lifting and I get all the glory.”

A few days later my friend’s five-year-old daughter told us about a dream she had, that I believe was a prophetic dream and a word from the Lord for us. She said, “Daddy was outside working and me and Cameron (her friend) were outside playing and wolves were circling around us, growling and looking mean. I don’t know why, but we just weren’t afraid.” We asked her what happened next and she said, “We went in the house and got confetti poppers and went back outside and started popping the confetti everywhere and the wolves all ran away.”

When we get to heaven, we will never have an opportunity to offer up a sacrifice of praise that is flavored with fear, confusion, sadness, pain, suffering. When we get to heaven, that opportunity will be gone. So, in the midst of hopelessness, I choose to offer up a sacrifice of praise flavored with all the fear, confusion, questions and to rejoice in the truth of who He is IN SPITE of the hopelessness of my current reality. He is greater and He is worthy of my praise. In the midst of death, he has still conquered the grave. In the midst of cancer, He is still the great physician. In the midst of addiction, He is still the 1-step program that sets the captives free.

We have a decision to make every day. We can either believe Him with our whole being and stand by the truth of who He says He is, or we can allow the facts of this inferior world to cloud the superior reality of His kingdom. Is He the name above all names or is He not? Am I his beloved, chosen daughter who has been adopted into His royal family or am I not? It can’t be both anymore. We have to be intentional about who it is we are agreeing with. Am I agreeing with the Father of the truth or the Father of lies?

But we all, with uncovered face beholding as in a glass the glory of the Lord, are changed into the same image, from glory to glory, even as by the Spirit of the Lord (2 Cor 3:18).

We trust who we worship, we become what we behold. Behold Him, behold His beauty. Gaze upon Him and the truth of who He is in every moment. I’ve found that in that place of abiding in him and gazing upon His beauty, there is no room for lies about who He is or who I am, no room for unbelief. It is all about Him, it is all about His beauty. When we gaze into His eyes of fire, it is impossible for us to walk away the same.