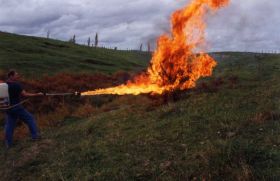 To Judge? Probably less often than you might think. We don’t have to go very far these days before we run into the pantheon of opinions, convictions perceptions, analysis, summarizations whatever before we run into someone, some group, some nation or some group of religious folk exercising their natural affinity to sum up another human being, a cause, an event, a belief or an incident well you get the picture, if there’s one thing we seem to all have in common its voicing our opinions.

Particularly when we don’t have all the facts, or worse any perspective. Lets dig into Luke 9:52-55

O my! Now we stepped in it… Where’s he going with this you might ask? Well probably not down the road you might think but let’s step in and see where it takes us today. Maybe you and I will get to the other side and maybe, just maybe…

We might wind up a little more gracious. I’m hoping, I sure need it.

One day Jesus was walking down the road on his way towards Jerusalem, he was going to pass by a certain village of non friendly folks know as Samaritans. You find the story in the Luke chapter 9. The ninth chapter of Luke is pretty fascinating, all through it runs a theme of Jesus continually breaking the disciples perceptions of who he was, where he was going, and the difference between mans assumptions and the Kingdom of God. Well the Samaritan village hears Jesus and his band of followers want to spend some time there and they actually send emissaries or word back through the grapevine and Jesus “the Jew” headed towards Jerusalem isn’t welcome in their village. I can’t help but wonder what that village missed out on that day, nor can I help wonder what group of men or village leaders took it upon themselves to make such a unilateral decision at the expense of the plain folk in the village. Men do this regularly… They make decisions based on limited information and faulty prejudiced perceptions that blow up the lives of those around them in concentric circles. More often though, they do these things to maintain power, prestige and position over others or even heaven forbid…A presumption of “spiritual superiority” over others. That’s where I’d like to turn today, and in the process maybe learn a little about ourselves, and continue to dig, clean and turn over to God those areas in our hearts non-surrendered that seem to always show up and reveal themselves. Where you might ask? In how we relate to others.

James and John two of Jesus closest disciples and friends are quite indignant about the cold reception and respond thus: “When his disciples James and John saw they said Lord do you want us to command fire to come down from heaven and consume them? (Luke 9: 54) Jesus actually appears shocked in his response as the Bible says he turned and rebuked (meaning a confrontation), and said “You do not know what kind of spirit you are of; for the Son of man did not come to destroy men’s lives but to save them.” They went to another village.

Where in the world did the two brothers get the notion to vaporize a village or a delegation from? The roots of their assumption appear to come from a passage in 2nd Kings chapter 1 let me paraphrase it but by all means read for yourself its fascinating (and very Berean of you!) Ahab one of the most wicked kings of Israel is dead. His son was just like his father. Elijah (The one who called down the fire from heaven in the sacrifice super bowl) is the main prophet. Ahab’s son Ahaziah becomes critically injured as a result of a fall. It looks bad in fact he’ll die as a result but in desperation he consults his pagan gods, (probably has the local astrologer read his fortune) and doesn’t get a favorable result. Elijah (it’s actually God through Elijah) sends him a message that says “Really you’re going to go the way of your father and consult the soothsayers?” Actually Elijah says “Is it because there is no God in Israel that you are sending to inquire of Baal-zebub, the God of Ekron? Therefore the bed where you have gone up you shall surely die.”

A very strange thing takes place. The king riddled with presumption sends fifty soldiers to Elijah’s campsite (you don’t find Elijah living in many cites) to demand Elijah “come down” the implied being do what we say at the kings bidding, I presume the king was telling Elijah come heal me. Footnote for the future, if you pretty sure someone is a prophet of God that manifest power like Elijah, don’t irk them.

Fire comes down from heaven and fifty men lose their lives in a moment of time. A very severe judgment extracted on a very presumptive monarch and his followers. Now you would think most people would learn from this right?

Another company of fifty men come demanding Elijah’s compliance and another fifty men die. It’s not until a third company of 50 men who’s leader (thankfully) request Elijah’s input with respect, which I assume they were indirectly and deliberately respecting God Himself does Elijah give the answer. The men at least that day go home back to their families and friends. By the way the answer, “Ahaziah you’ll die.”

James and John according to the Gospels have recently come back from the commission of the twelve were solo and without Jesus they travelled through the country performing miracles on Jesus behalf. In fact in the same chapter James, Peter and John are privileged to go up with Jesus on the mountain and see him transformed in their very presence to Glory, to Deity, and guess who appears on the scene and consults with Jesus in this amazing circumstance? Moses, and you guessed it… Elijah. The two brothers come down from the mountain with an amazing experience, actually it’s a unique experience as the rest of the disciples weren’t privileged to attend and they have the experience of the recent mission tour under their belt and in one instance we are taught with the best religious experience, even a valid life transforming experience, or what we like to call “a mountain top expereince” we can be very, very far from the will of God.

Let that sink in for a moment. In fact let’s let Jesus words in the same chapter sink in. While all these great spiritual awakenings an experiences are taking place amongst the disciples Jesus makes this strange comment in verse 44, “Let these words sink into your ears; for the Son of Man is going to be delivered into the hands of men.” While all the spiritual arrogance was frothing and fuming around Jesus it’s amazing He actually was so patient with his followers. Kinda like today you think?

I’m really bothered by the judgmental nature of Christians sometimes. I get it, we are to exercise judgment. That makes sense as without exercising judgment you couldn’t even apply the brake to stop at a stop light! But to judge others? To publically declare others as apostate? Maybe they are, buts it’s not your or my task to judge another’s spiritual condition and pronounce sentence. That’s well beyond our pay grade and I would argue, most of the time beyond our knowledge of the facts about the situation to begin with!

James and John give us a snapshot of just how like (or unlike) Christ we can be. In one moment of time they sum up a group of people as the “thems” and determine they are spiritually inferior to the “us.” There is no doubt left from the passage this is fueled by incredible spiritual experiences they are subject to even privilege to. It’s that the take away was a wrong as it gets! Here’s the sobering part; they use their knowledge of scripture and their understanding of its application to come to a “dead wrong conclusion.”

I really like Billy Graham. I’ve heard him speak like many and have taken the time to read some of his books. But recently it was in a book by his daughter Ruth the following was shared. Ruth Graham shares about and incident when she was a young parent that one of the children in her brood was not acting up to snuff. Now this wasn’t simply a one occasion thing. Frustrated, I get it I’m a parent, she sought her father’s counsel one day about it, complaining about the child their intentions, their directions well you get the picture she shares she become judge jury and executioner of the situation. After her dad listened to this for a bit he interrupted her saying “You don’t have enough information to make that assumption.”

She got the point. We should too.

Christians I regrettably have to admit, and throw myself in the lot, have an uncanny ability to take spiritual experiences and knowledge meant to communicate salvation and healing to the world and turn it into one ugly weapon. We do it in the church as well wielding power over each other the same way! (It just looks nicer)! “The Son of man did not come to destroy men’s lives but to save them.” Jesus is most likely not rubbing His hands in heaven waiting to come back and “dole it out on the world.” His message is still salvation in case we forgot… and He still loves the sinner. It’s just He hates the sin so much He died for it for you and me and the world. Yes His surrender to the cross and death still is atonement for all those sinners out there and bad people who’s journey in life we can’t relate too. Sometimes I can’t relate to it either. That’s why I need Jesus. But the same sins the “thems” might be caught up in are just as grievous to God as cheating on your taxes, stealing from your workplace by taking an extra five minute break or padding your expense account….

Or the sin of presumption, one of the worst.

Mountain top experiences don’t establish your faith. You can know scripture backwards and forwards and still be quite hateful. Oh they may help you make a major turn or provide clarity and direction but our faith is worked out in the trenches on a day by day basis of surrender to the 24/7 call and prodding of the Holy Spirit which is constantly trying to conform us to the image of Christ.. Why?

So the world sees the real Jesus in our lives and runs to Him.

J.P Grier is a writer at SentinelforChrist com – Sentinels For Christ is a network of Christian men helping each other to press deeper in Christ.