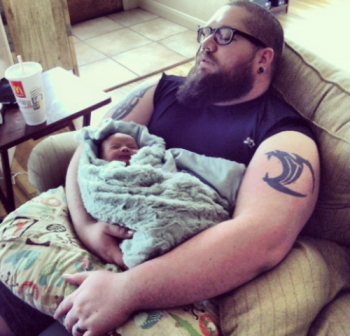 For Parents From a Parent

Ever have one of those sermons that penetrate and connect with something?

This week we we’re talking about honor…That’s hard enough really cause when you think about it pastor or layman church attendee or not, you already know what your thought life’s like when no one else is around. I’m going to assume no one has to be convinced of this but I’ll remind us if we’ve let this slide, Jesus made it abundantly clear. It’s not the actions that matter on the outside, it’s the heart. It always has been. Remember the Sermon on the Mount? Check out the fifth chapter of Mathew verses 21-27. Or how about this one, “For the mouth speaks which overflows from the heart.” Matt: 12:33-34.

So back to that concept of honor and fatherhood. Now you single guys stick around for a bit and don’t close the book because you don’t have kids or a family yet. You’re not going to get married, and prior to that have your life of unrestrained parties and then “suck it up” the day you get married thinking you’ll “turn on the honor button.” Nothing works that way. If you think this you’re deluding yourselves. The man you are now….prior to marriage will be the man you’re going in the marriage. By the way ladies…..this principle is gender neutral. Character is cultivated, not coerced. What struck me this particular day was how pastor tied the concept of honor into being a Dad.

Now let me be transparent, being a Dad’s tough for me. We live in a blended family. In our house there me, my wife, (she’s the Eve to my Adam by the way, without the whole fruit tree episode!) and there’s our seven year old daughter and my sixteen year old step son. I got 10 year old twins that live with my former wife in California. We appreciate let me tell you, the complications of family dynamics! This day pastor was speaking from Colossians 3; (one of my favorites) verses 3:21:

“Fathers do not exasperate your children, so they will not lose heart.”

Now I understand what being exasperated is, you’ll have to trust me on this and if not stop by the web site and read a few chapters of the book “Why Men Kill.” I know what it means to lose heart too as over the years in the counseling of others I’ve had plenty of clients who had lost heart due to some unforeseen event or ill treatment from someone they loved or knew. So this wasn’t new either. But pastor Jim, today talked about the exasperation of a child after a Dad’s blown it. He didn’t use some horrific incident of betrayal an emptying the bank accounts and running off with another woman which seems to be the “stereotype” brand of men that Christian political correctness that has fueled over the years, which describes by the way, very few actual men I’ve run into in almost four decades in the church and almost 30 years of ministry. What pastor described in the context of exasperation was a man, who simply dropped the ball on teaching his children what was really important to in life. A man who got busy… with the things of life and forget what his primary role as a father is; at least described in the Bible in regards to children. What’s that you ask?

It’s to teach their children to know God… period. You do that right and all the rest is going to take care of itself. Funny how that’s a common theme of Jesus, put your focus on what’s truly important and the rest will fall into place it may not be what you want grant it but it will be what you need, “But seek ye first His Kingdom and His righteousness and these things will be added to you.”

Well what pastor said hit a nerve with me that’s for sure. He framed how the ”exasperation” plays out in the long run. Say when were 25, 35, or even 40 and look back and realize we weren’t prepared for anything by our fathers and in bitterness and frustration inside our hearts thinks “Why didn’t you prepare me for this?”

Yeah that one hit home….hard.

I thought particularly of my step son. It’s been hard for him. He came here in 2009 unable to speak any English. He’s a strong independent young man, brilliant actually. I knew enough of his former household to know the exasperation factor was high. I thought of my own preparation by my Dad and what he focused on. It’s not been easy with my step son at times. It was rough like it is with many blended families the first couple years. The divorce rates in blended families runs about 80%, it’s a tough challenge. God’s been good to our family though. He made Himself known in ways I never would have imagined.

After service when we were in the car I asked my son what he took away from the service. He picked up his cell phone as he had taken notes, and went right to the comment pastor Jim had mentioned about fathers not exasperating their kids and leaving them ill equipped to handle life. (Don’t tell me kids don’t listen in church service!) Maybe the problem is we should be making sure the messages resonate with them as well? I was ready for it though as my own journey with my own Dad had prepared me for the moment. I responded by telling my son this. “Biao,” if there’s anything I can do to help you prepare for life, and it measures up with God’s word, you have the permission to ask me for it.” I don’t know if he was surprised or not but he said “Ok.”

There’s undoubtedly men (divorced or not) reading this thinking “I’ve blown it.” Well maybe you have? But God is already ready to make something new and regenerated out of something ill, 2nd Corinthians 5:17. But if you don’t take the time to even ask what the right thing is…..and then be prepared to execute the best decision when it may not even seem like it will make a difference or even make sense you’ve failed already. You’ll continue… marginal as a father maybe bringing home plenty of money and teach your kids nothing about what’s important.

Later that day when we were at our first driving lesson my son when over the curb and into a telephone pole. I bit my lip as I saw the pole coming and heard the crunch of the left front fender! “What would my Dad of done flashed through my mind?” After the car settled I got out walked around to the fender, (a supernatural calm had descended upon the scene!) expecting to see complete ruination! There was barley any damage. I wanted to look around to see if there were any hefty angels in the vicinity! I said calmly as my son sat in the drivers seat looking a bit shaken as he had one of those bouts were you get the accelerator mixed up with the brake and then everything goes downhill driving lessons. “Well that’s probably enough for today let’s try it again next week.”

My son, and how I viewed him and how I would respond meant everything to him in that moment. God showed up again on my behalf and provided grace upon grace revealing just how much He has been working on me for some time.

We’ll try the driving lesson again tomorrow, albeit wiser for the experience!

J.P Grier is a writer at SentinelforChrist com – Sentinel For Christ is a network of Christian men helping each other to press deeper in Christ.