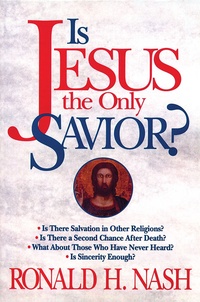 Is Jesus The Only Savior?

So is Jesus the only Savior?

That really is the question that separates more people here on earth than anything else isn’t it?  There’s no real way to present it without offense either.  We like to gloss it over sometimes in the contemporary evangelical church with slick terms like “meeting Jesus” or “giving Jesus a chance.” I think for many of us one of the difficulties we wrestle with as Christians and our beliefs around our faith revolves around  a couple issues, at least for me which I’ll try and present in a way that’s authentic and does not diminish what I believe.  One really revolves around what I have decided to believe about Jesus himself. The second is the very human reluctance to “go against the flow,” and conveying beliefs that are counter cultural and non-popular.

First, do I believe Jesus is the only Savior?  By that do I mean that Jesus is the only way “or door” (he used that term for himself by the way in John 10: 9) to God?  Well if you mean can you know or have knowledge about some the attributes about God without knowing Jesus I would have to say your right, and in that sense an articulated knowledge of Jesus would not be necessary to know some of the attributes of God.  The Bible teaches that there are attributes about God that are evident in the very creation (meaning the earth and the environment we live in) that testify about who God is, i.e. His invisible qualities, eternal power and divine nature (see Romans 1:20).  Evidently, there are things we know of God separate from a direct knowledge of Christ or professed personal allegiance to him.  In that sens then you have me I’m not exclusive, just ignorant.

But if you ask me is Jesus the only remedy between broken humanity and the Creator that made them and is it only through Christ Jesus that an actual relationship with our creator is possible then I would agree with an unqualified “Yes”, Jesus is the only Savoir.” and I probably add He is also the only way to reconcile the broken relationship that exists between us and God that allows God to fellowship with us.

So does that make me an exclusivist?  Possibly.

One of the hesitations I have about having such a position is frankly I don’t have all the answers to the what, why and how of God.  Actually as I age I have more questions that revolve around the mystery of how big God is and why he would choose to save someone like me in the first place.  I’ve had to reconcile that. My faith while it moves forward actually has the effect of accumulating more knowledge but not becoming more “full.” It seems this “filling and emptying” of the self is a part of seeking relationship with God for me.  The more I seek him the bigger and more mysterious he is.  That’s a pretty hard position to defend Christianity from an exclusivist position hide in the face of a practiced agnostic or skeptic.  So not having a concrete or acceptable explanation for everything has me a bit vulnerable to begin with!  I think what bugs me more though is the following.

Holding this position forces me to admit that what a human does with their knowledge of Christ (or not) decides their eternal destiny, either fellowship with God in what we understand as “heaven” or separation from Him in what the Bible clearly teaches as hell, a place Jesus himself regularly referenced as “a place of weeping and gnashing of teeth”  I don’t want to convey to someone to “meet Jesus” or causally take a look at him like their sampling something from a buffet.  I want to present Christ for what he said about himself. But I want to do that in a way that at least is honest with those I’m talking with.  Jesus himself said some pretty exclusive things, such as “I am the way the truth and the life, no one comes to the Father except by me.” and “When I am lifted up from the earth I will draw all men to myself.”

How about this one, in a discussion with a group of religious experts one day Jesus got into an argument (or he orchestrated the argument) to convey to a group of people this issue of his exclusivity.  His opponents argued that knowing the right things about God, having the right lineage or pedigree was what mad a man “right with God.”  They even traced their ancestry and justification for their beliefs right back through Moses to the initial Hebrew patriarch Abraham to drive the point home.  It was a very heated argument as Jesus was challenging the very foundation of their beliefs about God and how a human is restored to Him.  Wanting to convey the flaw in their thinking, Jesus ended the argument with an astonishing statement referring to their revered patriarch Abraham,  “Before Abraham was born,”  “I am” (See John chapter 8).

Now consider just how exclusive that statement was. Jesus in some way only comprehensible to himself  was saying, “Everything you think is important is realized in me because I am the source of it all.”  That’s how it was understood anyway because it was so offensive his opponents picked up rocks and attempted to stone Him to death immediately.

So if I’m going to be honest with what Jesus said about himself and afford the Bible the integrity of what he said about himself and the reality of his resurrection from the dead.  Yes I guess that makes me an exclusivist in that Jesus who according to his own words pre-existed before his own human birth (repeatedly also referred to by himself) and was working to reconcile broken humanity back to God as a response to our willful stubborn refusal of him.  That I can embrace.

I still won’t have all the answers for the skeptic or the opponent that will satisfy them no matter how much I read or study or convince myself of my own beliefs.  Christianity is not meant to be decided in a court of law or public opinion for that matter.  What I have is this, the reality of Jesus that has stood the test of time because its Jesus who’s words that convey the answer to my own brokenness and liabilities which convey a mighty God who is exceedingly greater than the sum of all humanities thoughts never gave up on us when our actions compelled him to do so.  That allows me to believe God somehow through His Son Jesus is able to do what’s right no matter what, and has been doing so, through Jesus since the beginning of time since Jesus also conveyed he was with God our Father even before the foundation of the world. (John 17:5).

J.P Grier is a writer and developer at SentinelforChrist com – Sentinel-For-Christ is a network of Christian men helping each other to press deeper in Christ.